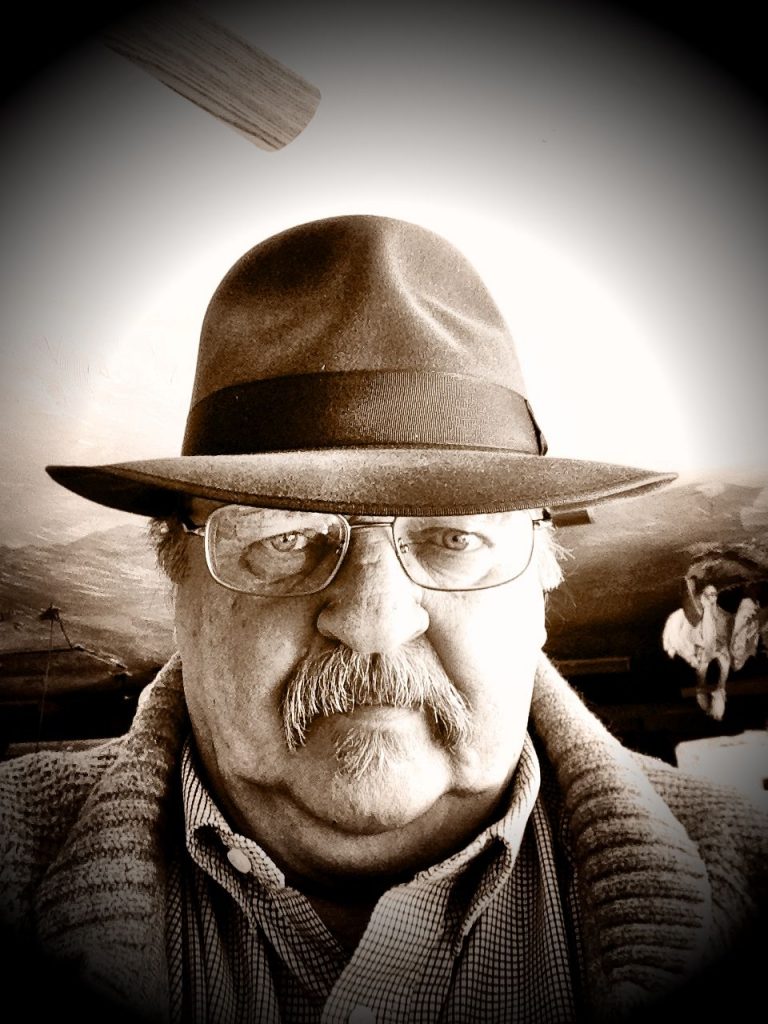 Born in Powers Lake, North Dakota, Mike’s parents moved around North Dakota for a few years and settled in Minot, North Dakota. Where his father was a farm insurance agent and mother worked at Montgomery Wards.

My Father was avid, outdoorsman, my CubScout Leader. He took me on fishing trips, goose hunting, he made knives and hand tied whips.

As he traveled for work occasionally, I remember being with him, having lunch out of the trunk of the car. When I was 10 my Father died unexpectedly at 34 of a heart attack.  I felt abandoned.

His brother was a commercial artist in Seattle, Washington. My mother encouraged my art and I was able to meet my Uncle Arnold several times, who also encouraged my interest in art. He also showed me how to throw knives.

I had had art classes all four years of High School with Carl Hagar as art teacher.

Mom wanted me to be a pharmacist. I thought I would be a plumber. I wanted to surpass Picasso.

I went to Minot State College, my mother said she would pay for my first quarter of classes. Where I received a one year scholarship from the Minot Art League. I graduated 1968 Bachelor of Science degree, Art major and Sociology minor.

I had the privilege to study under Tarmo Watia as my art instructor for the first year ( the only year he was there ) in fact I took most all of my art classes n that first and second year.  My eyes were opened up to the idea of art for arts sake.

I taught high school art in Holdingford, Minnesota starting in 1968, for 31 years, retiring in 1999. When teaching I spent much time working on themes that many times, I now realize expressed the pain of loosing my father at the age of 10, then my Grandparents a few years later and my mother. I became involved in a dark fantasy side of art.

I tried to create what I thought other people wanted to gain acceptance. Painting was a constant need but almost painful.  I went through a pottery stage for a number of years  but that did not satisfy me.

I also did metal sculpture and when I retired I explored knife making. But that was not it either, as my wife once said I was like U2’s song -‘I Still Haven’t Found What I’m Looking For ‘. I became lost and quit making art.

2006 with high speed internet, I had the opportunity to began working part time for TopRank Marketing, a B2B marketing company, I have been with them for almost15 years.

Now however I am painting  for me with a blank canvas I make a few preliminary decisions, but let the brush dictate my direction. I restrict myself to hard edges, which I felt I needed as ideas I picked up from having to to be very precise at my analytics job with TopRank Marketing.

I create what some call stream of consciousness free flowing or unconsciousness decisions., mind maps if you will. As I look back there are traces of this in my work , the difference now I find a peaceful acknowledgement of  letting the work direct me, I no longer have several cigarettes and a brush in my hands, just the brush.

The repeating shapes I use  some what relate to ‘The Boneyard “a painting I did years ago of a boy sitting in amongst a pile of bones, representing the death of almost all my family.

That is where my art is taking me, to explore the flow. When I come to a decision point I go with moving forward.  Completion comes naturally when the painting tells me to stop.

When Greg Konsor opened  ‘Art in Motion’ in Holdingford I was proud to be asked to be included in the inaugural show August of 2020 at that time I felt I was ready to show my work again.